A Look Back, November and December, 2018

Yesterday this post was sent out by mistake. It was still only a draft. It happens. I worked on it some more and here are a few highlights from November and December. Over the next week I will do the rest of the winter. 2 or 3 more posts.

Thanks for being part of the family.

A few highlights from November and December: 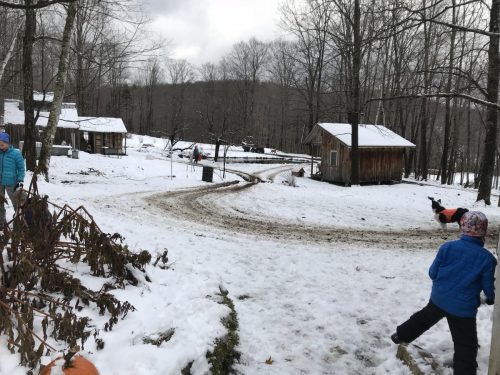 The first snow came November 10th. Two inches of snow on the ground. This day had already been scheduled as “wood moving day”. We moved 5 cords of 2 foot wood into the basement, with the help of family. I asked about waiting a week, so the snow would be gone. I was outvoted and it was a good thing! 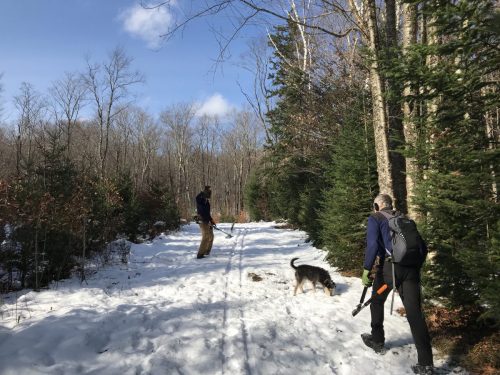 Bill skied the Peregrine for the first time November 12th. This was also the day Bill and John did the final clean up on the Peregrine. Bill clipped and John used a weed eater. Turned out to be a good thing, we still haven’t seen the ground. 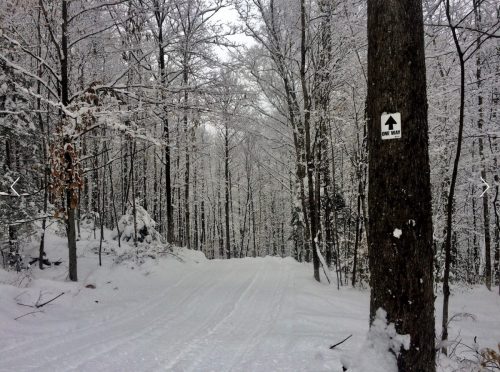 On November 17th and 18th season Pass holders started skiing. Ian had the Peregrine, Turkey, Grouse, Woodcock and Snow Goose packed and a track in.

On Monday the 19th, The Peregrine was groomed and being skied. This was the day Gretchen got this great video of Patrick, John and Leo skiing the last drop off. (Best viewed full screen.)

On the 20th of November Ian started working to fill in the holes in the trails that were full of water. Remember we had 10.5 inches of rain in October, and the ground was not frozen. He started cutting up balsam trees and laying the branches in the wet spots to catch the snow on top of the branches. Filling water holes would be a recurring theme through the third week in January.

Thanksgiving was the 22nd, season pass holders were skiing. 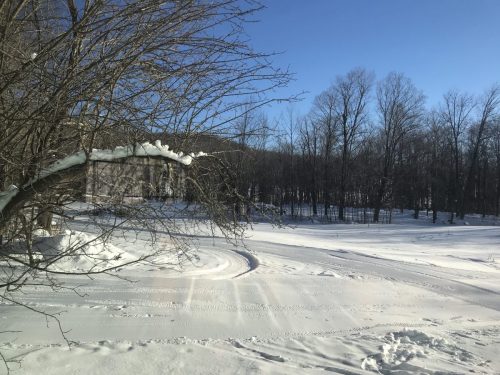 On the 23rd, we officially opened, earliest first day ever. The trails were beautiful, nice skiing on the low trails.

The forecast on the 25th was for heavy snow, and Ian said, “I hope not the kind of snow that sticks on trees and bends trees and branches over.” 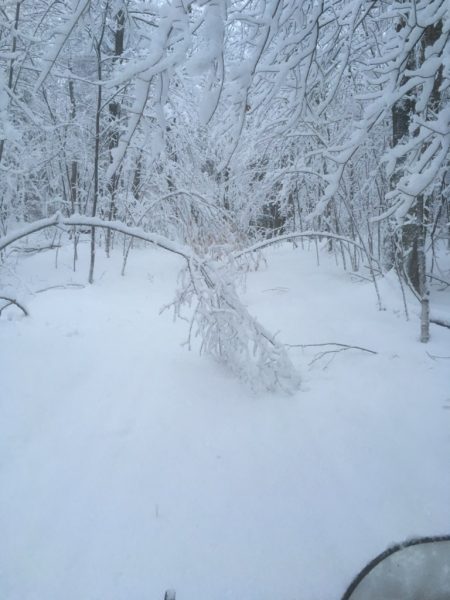 And on November 26th, a Monday, it started snowing. A heavy, wet snow. 10.5 inches by Tuesday morning. The kind of snow that bowed branches. Some bowed, some broke or toppled over. But the mess would get bigger after another 4 inches of wet, heavy snow on Nov. 29th.  Limbs and sticks down everywhere. A huge mess.

November ended as a record month, 40.5 inches of snow, earliest opening day, lots of good skiing and 3 to 4 trips around each trail to clean up the mess. 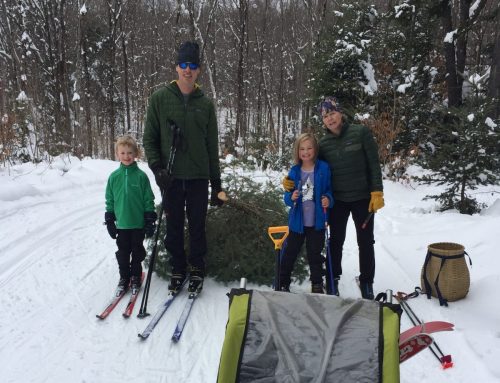 December 1st, good skiing  and we pulled Christmas trees out of the woods on skis. Another first, skiing with the tree, not cutting it down. 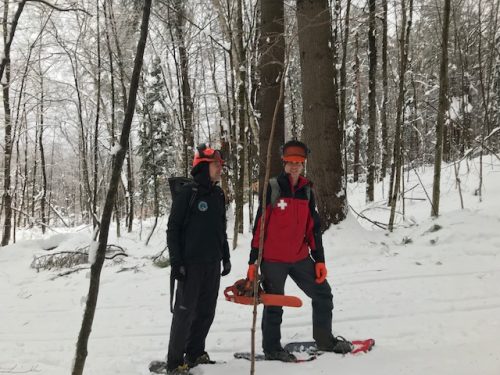 On Dec. 2, closed, yucky, rainy weather. Ian and Andy went around the Middle Blue Jay to clean up the mess from the week before. Jonathan got his saw stuck in a huge maple tree that was down on the old Goshawk. 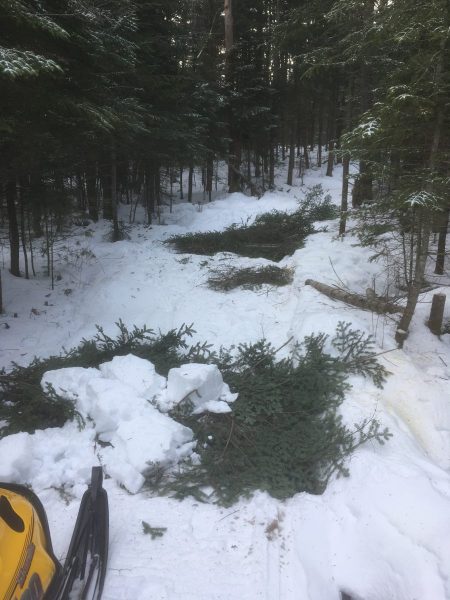 The rest of December was spent fixing water holes. Filling in wet spots with branches and shoveling snow on top to make a base. 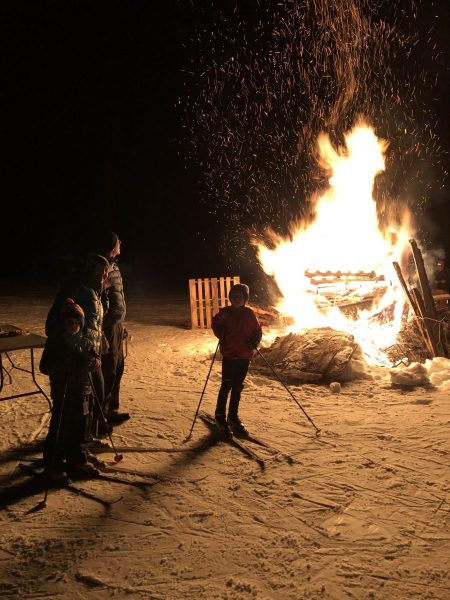 On December 20th, West River Sports hosted a winter solstice celebration at Wild Wings, they sure can build a fire. There were about 100 people, lots of kids on skis. The best. 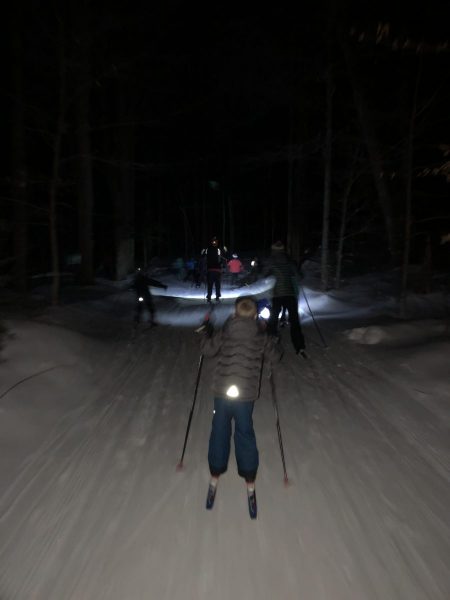 December continued to roll by, working on the trails, either with a shovel or a chain saw. On Dec. 21st and 22nd, it rained, 2.03 inches of rain. And somehow we were open again Dec. 23rd. (Ian and Dick are what got us open.)

And on Dec. 27th we hosted the first Wild Wings Jager Sprints. This event was at night by head lamp. I think Gretchen won the contest for the oldest ski suit. She wore Chuck’s ski suit from 1978. 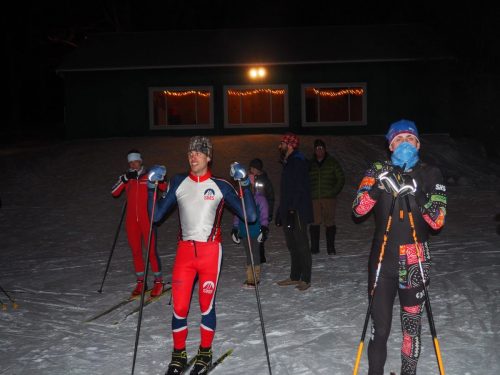 More rain on the 28th. On the 29th a large shoveling crew went out. Andy is holding the large push shovel on the left in the photo. We did so much shoveling this year and found that shovel to be the most useful. We now are the proud owners of 4 large push shovels. 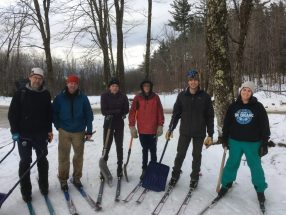 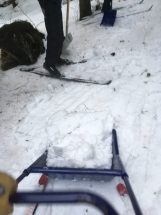 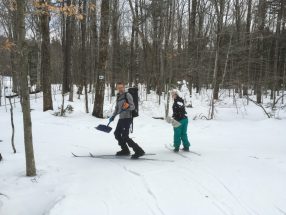 We were open again on the 30th. Ian saw the Grouse on the Grouse. And got a picture! 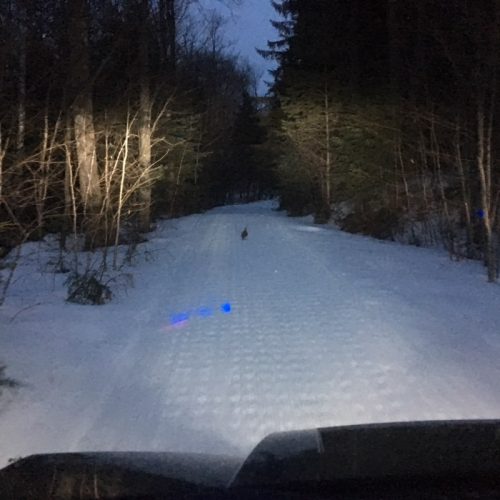 Grouse on the Grouse.

By end of December we had been open 27 days. The winter already felt like a lot of work, but promising. Little did we know, the pattern would continue. Snow followed by rain. Lots of wind, leaving lots of sticks to pick up. But Ian just kept working, by himself or organizing crews, at keeping the trails cleaned up, filled in and well groomed. 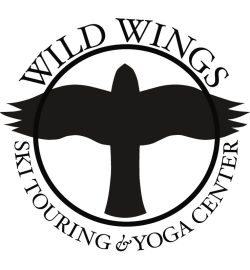